From the wharf, the boat instantly recognisable with its almost vertical stem and slightly sloping deck, three spreader levels, its streamlined deckhouse portholes and navy blue livery. This is unmistakably the Sun Odyssey 54 DS from Jeanneau, which I’m going to embark on to sail from Bequia to Martinique. 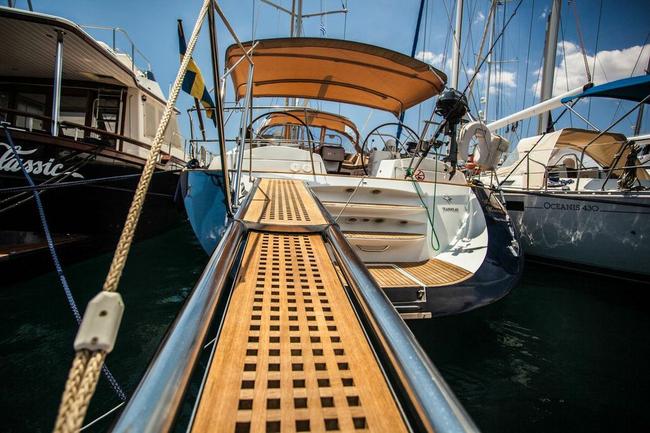 I pinch myself but no, I’m not dreaming. This is definitely the boat that caught my eye me and set me daydreaming for hours when it was launched in 2002 and I’m about to sail on her in the days to come!

Rewind to 2002: a 54-footer is a very big boat. It was an unusual size at that time and Jeanneau had, rightly, placed much hope in the boat. The idea was to build an elegant, high-performance cruiser that you could really live on-board, that was still powerful under sail, even when heavily loaded. Designed by Jacques Fauroux, the progenitor of the splendid one-offs DJANGO 2 and OCEAN SEVEN, this boat’s lines amazed people on her launch and she continues to turn heads today. Built from fibre glass laminate with Kevlar reinforcements, the wooden structure is laminated, as is the lower structural decking on which the engine chassis and the keel rest (bolted on with 32 mm diameter bolts!).

Details worthy of a superyacht

Not yet entirely convinced that I’m not dreaming, I embark via the wide skirt and its three teak-finished steps. I undo the lifeline that slides with a spring before disappearing into one of the rear pushpit tubes: the kind of detail you’d expect on a superyacht! I immediately notice that the version I’ll be sailing is superbly fitted out with a teak deck, chrome rigging, electric winches, and padded cushions on the front sundeck. I go in and discover the biggest innovation on a production boat of this type: the cockpit. 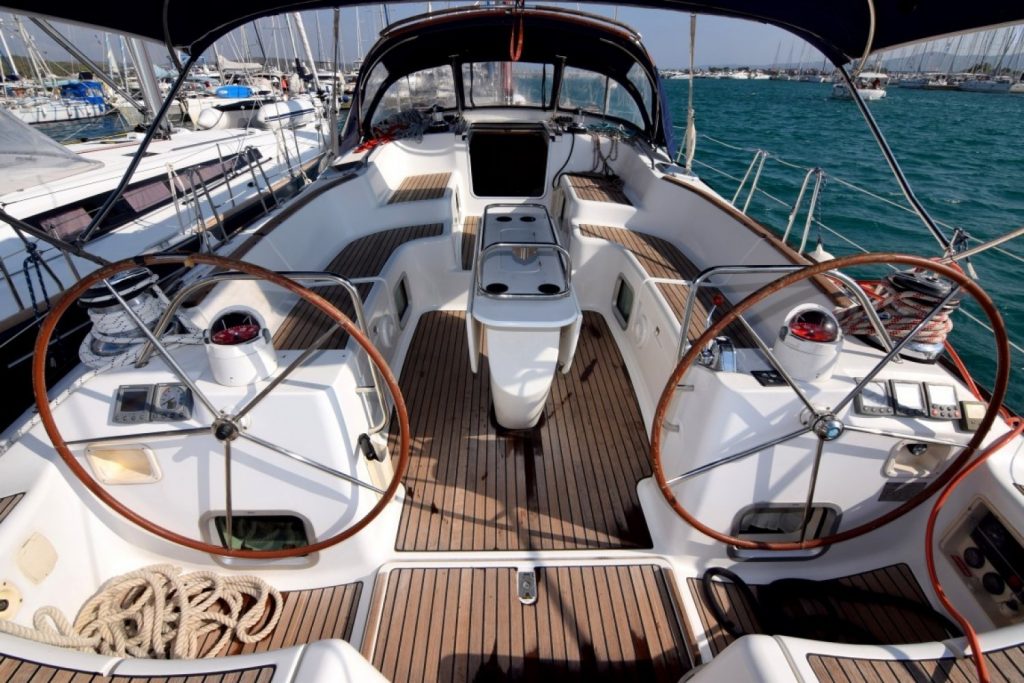 Divided into two distinct areas by the twin-wheel steering set-up (rear area for manoeuvring and front area for relaxing), there are several seating levels with the bench seats. For manoeuvring, there are two electric winches for the genoas, the lighting and engine controls on the port side console, and the autopilot controls and repeaters on both sides. The position of the engine controls (king sized, chrome) means they can be easily reached even when steering from the starboard side console.

The large Raymarine navigation display is fitted to the front of the table stand. But what are these pedals at the foot of the table? That’s the electric jib furling, an option from Jeanneau. Winches, windlass, thruster, electric rollers: the Sun Odyssey range model is at the top of the technology game.

I move further into the cockpit, going past the beautiful solid wood table, remark the stainless steel hand rail, and then take the wide catwalk. 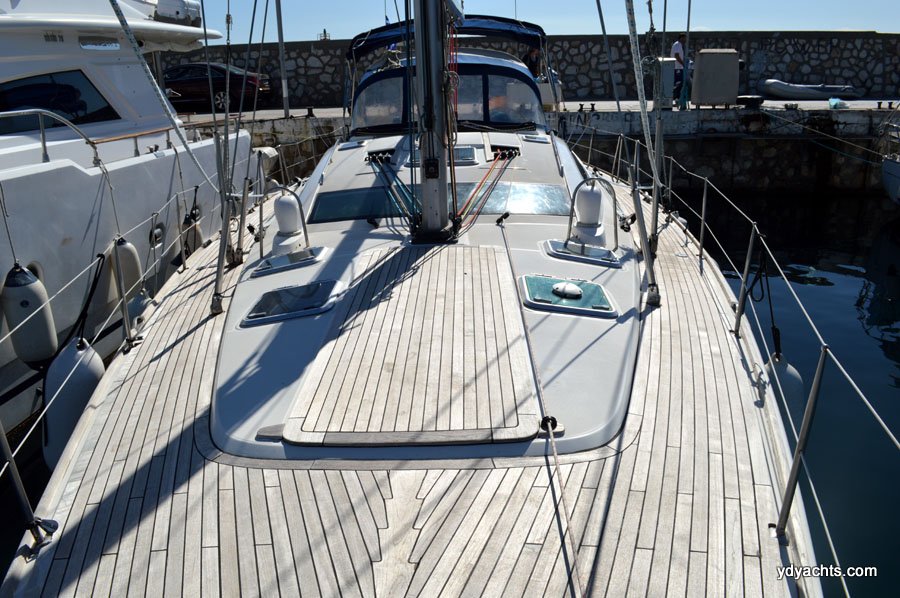 A teak liston a good 4 cm high runs from rear to front to ensure you can move around safely, especially as the shrouds fold back against the roof and leave the passageway clear. Two cowls on the roof, 8 hull portholes, 6 cockpit portholes, 12 deck portholes and the two profiled side windows should be enough to provide good ventilation, but the boat is air-conditioned (but I’m not going to use air conditioning – on a sailboat! What are those American like?)!
In front of the mast, there is a large sunbathing area entirely covered with padded cushions.
Then I come across a releasable forestay – it’s really good as the rolled genoas don’t work very well when it’s very windy; and then there’s an extra-large anchor cable. I’m not sure I’ve ever seen one this deep. The windlass is very strong and fitted with a chain brake fixed on the deck. The latter, equipped with a reinforcement able to bear the tensile force and doing away with the need to manoeuvre the whole thing with a strong hand, lies against the deck. Finally, just under the bow of the boat, Jeanneau has added a stainless steel protective fitting to protect the hull from damage when moored.

A solarium-style lounge and a chart table worthy of an admiral! 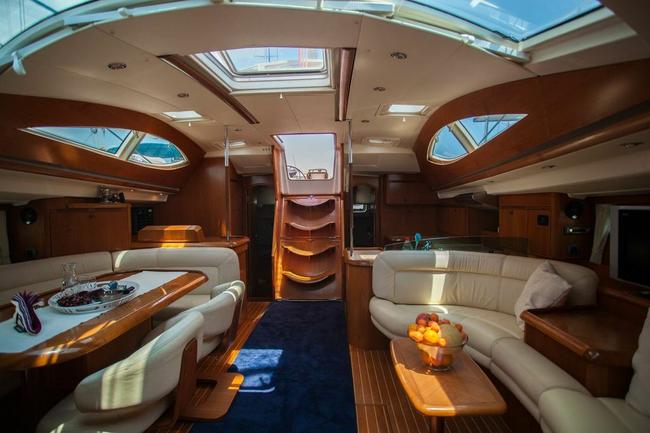 I head inside down the wide, gentle descent – ideal for your mother-in-law – and I end up in what feels like a light-flooded solarium where there are two lounge areas. 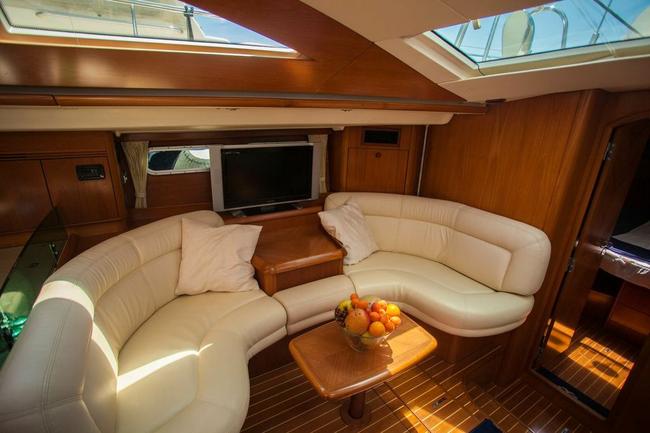 Here we are in the saloon! A lounge with a bar to the left, and a dining area for six to the right with two chairs… real chairs you can move around, just like at home, but yes, you can stow them while sailing. The tan leather upholstery gives the lounge a very British feel. There is plenty of light and the L-shaped galley slightly below on the port side has a Corian countertop, a Frigoboat plus a conventional refrigerator, a microwave, an extractor hood, a double sink, a three-ring stove , an oven and – a real luxury! – a cupboard where you can leave the dishes to dry out of sight!

On the port side, there’s a stunning curved chart table with a curved wooden instrument console. 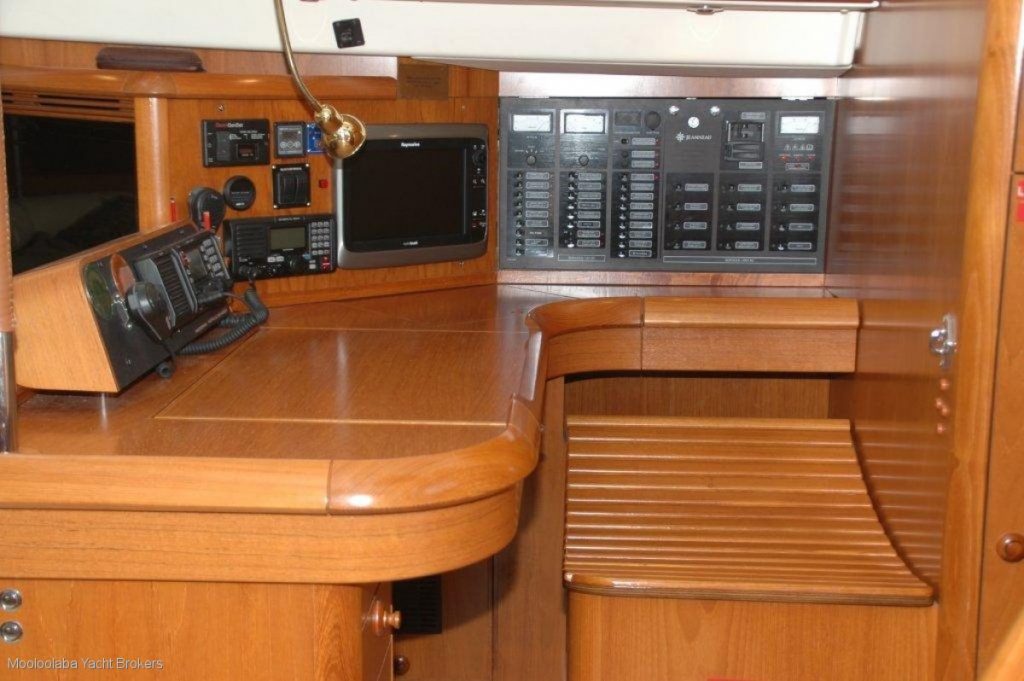 It must be said, the quality of Jeanneau’s woodwork, most of it solid wood, is absolutely remarkable. Just behind, there is a cupboard in which to hang your wet weather gear. 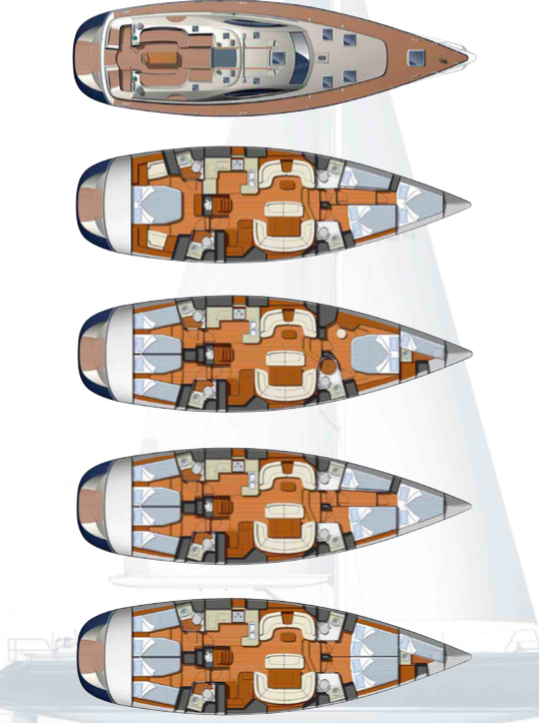 The version I have has two aft cabins and, at the front, an “owner’s” cabin featuring a real bed with a 205 x 160 cm slatted base, a dressing table and seat, plenty of storage areas, and a shower room. Then, in the forepeak, there’s a “skipper’s” cabin with sink and toilet – under the mattress! Nice! I’m happy not to have to use that and, in any case, on this boat, it’s used for storage.

These cabins are light and spacious and some of them (the owner’s cabin) have a shower fitted in the washroom with duckboard and a curtain so you don’t soak the whole room when showering!

The boat’s systems are pretty sophisticated The grey water is centralised in a tank that automatically drains into the sea. Black water is stored in tanks for two of the four toilets. The drinking water supply system has two pumps, a bladder tank (which prevents the pumps from tripping at each operation). The 45-litre water heater is a little meagre, unlike the water capacity (930 litres in four stainless steel tanks). As for electricity, this boat has been upgraded by its owner with the focus clearly on comfort. The choice of a 110 V soundproofed generator means the electrical consumption on-board can be staggered, including the air conditioning. The battery packs (three: start, 12 V and 24 V) are generously sized, especially the 24 V pack that supplies the winches, reel, electric windlass and bow thruster. The set-up is quite slick and includes a high-performance alternator capable of three-step charging the battery packs to 100% while sailing. When docked, the two 12- and 24-volt chargers ensure fast recharging – if the power is available in the port!
Finally, a 1500 W converter delivers 110 V at all times on board.

The channels between the Caribbean islands are crossed by ocean swells with no protection against their height. You often feel the full whack of it. A heavy boat with a powerful hull and plenty of canvas is your guarantee of safe and pleasant sailing in this region. Which is precisely what we have here! This morning, as we set off from Bequia, our crew (four men), sport wide smiles once the day’s weather has been confirmed: 20 knots with gusts up to 35 knots (east). It is not every day you get to enjoy a strenuous sail on a high-performance cruiser ideally suited to conditions, accompanied by an experienced crew. It should take us eight to nine hours to cover the 71 miles, the timing is excellent – we’ll be in Rodney Bay just in time for aperitifs! 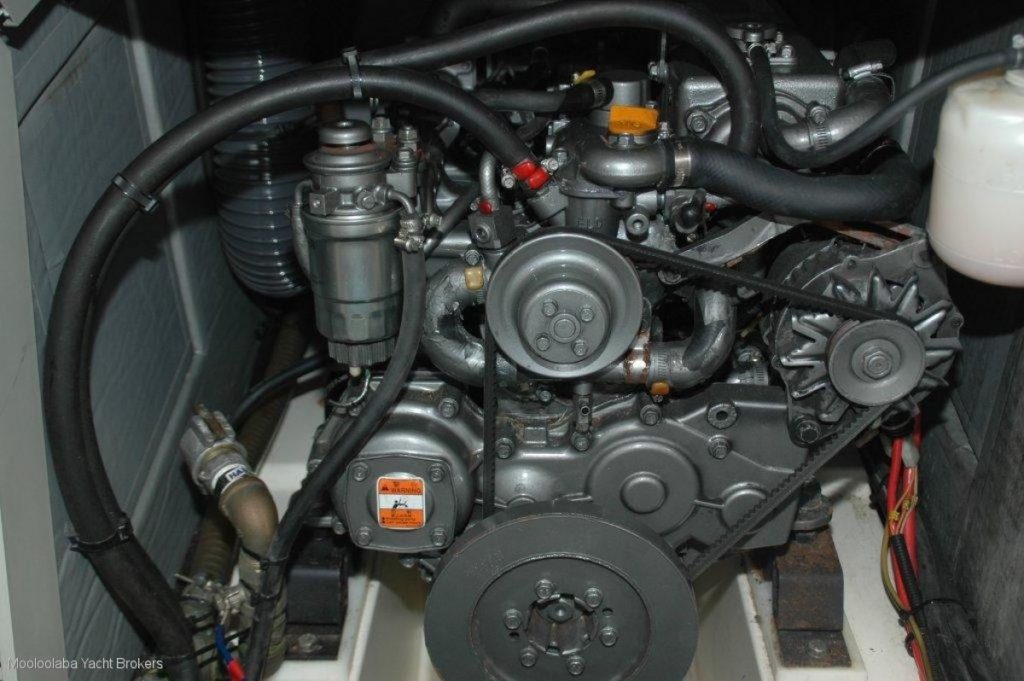 We raise the anchor and sail north, aiming for the western end of Layou Bay off Saint Vincent then, from there, heading 15° towards the Pitons of Saint Lucia.
The 110 horsepower of the Yanmar engine powers the boat forward effortlessly, reaching 10 knots at 2,000 rpm! At 9 am, once out of Admiralty Bay, we deploy the full genoa with the electric winch, rolling it out with the electric furler. It’s all done easily although a little slower than by hand. We hoist the semi-battened mainsail, equipped with two automatic reefs and a third manual one. Again, the manoeuvres work well with the electric winch but the sailors are a bit twitchy behind their respective winches, certain that they could do better. We’ll see later. The boat, which weighs in at almost 20 tonnes, takes a while to get going under sail, but once she’s off, there’s no stopping her! 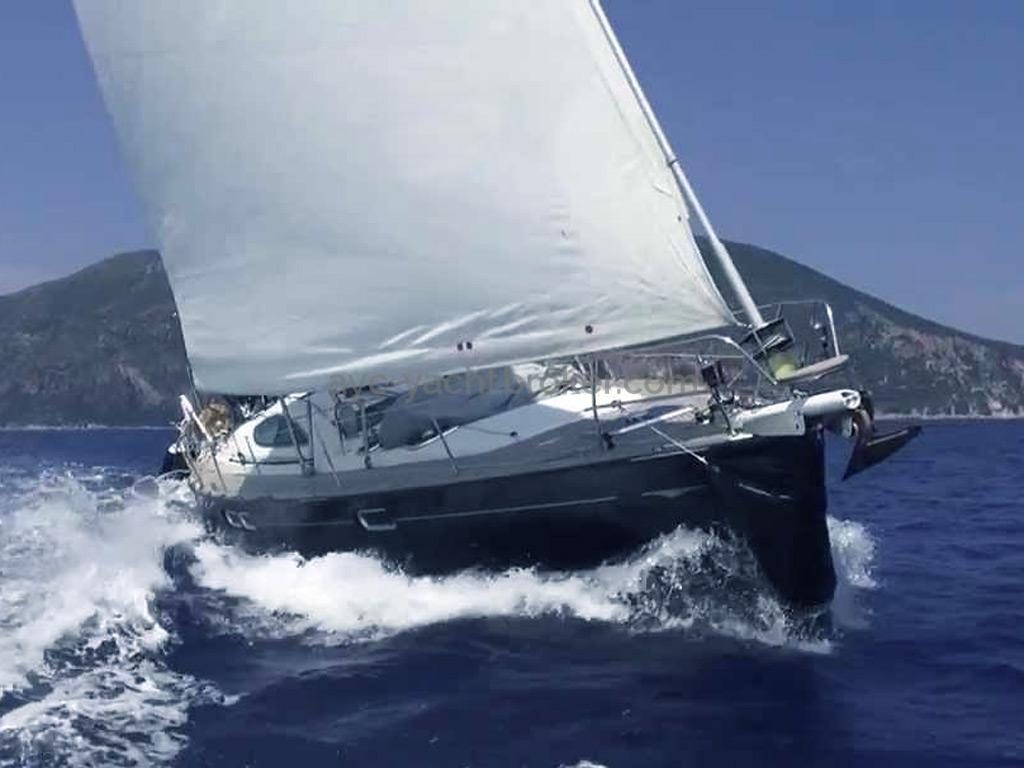 The helm is light thanks to the self-aligning rudder bearings and the 50 mm stainless steel rudder shaft, which is not likely to twist. I’m tall and the steering position is really good, the cover over the survival cell serving as a footrest.

With a crosswind and gusts of 20 knots, we’re able to keep on top of things. There is some listing but as the main beam is not situated to the rear, you don’t feel as high up as you do on more contemporary boats with flatter hulls, so it’s more comfortable.

Adjustments are made extremely easily using the electric winch – in fact, a mutiny is imminent as the crew have nothing to do! I’m so absorbed in things that I manoeuvre and adjust all by myself, thanks to the miracle of electricity, handling this magnificent 20-tonne plaything as easily as a 420! 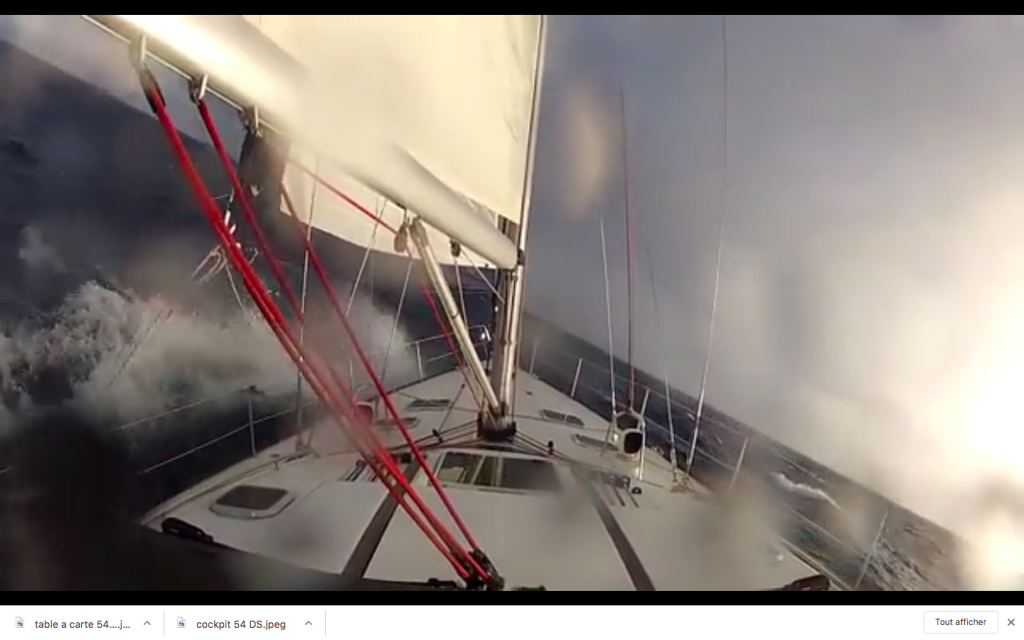 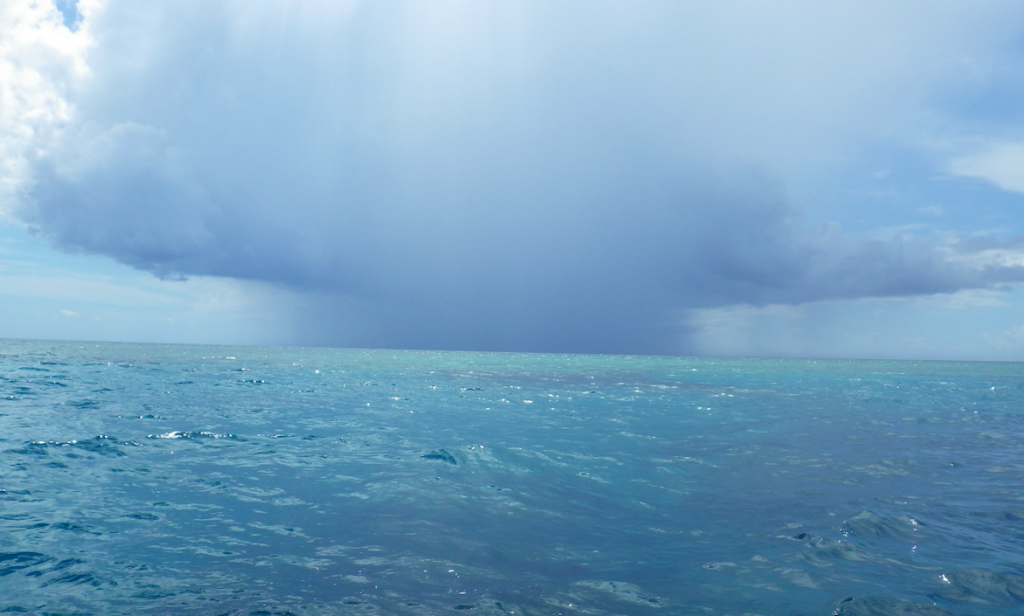 At the northern tip of Saint Vincent, we encounter a warm-water squall of warm water, which we greet in sailing jackets and swimming shorts, the third reef and genoa reefed. It’s a pleasure to release two reefs using the winches and electric furling system. It would nonetheless be useful if you could strap yourself somewhere when at the mast foot, while listing over, to reach and undo the third reef, but there is nothing to hook our lines onto, but those lines would be too short anyway, given the width of the boat!

The squall over, the whole mainsail is hoisted back up again by hand, followed by the genoa (with confirmation that the crew are faster than the electric winches), and we’re off at a hellish speed again. We are sailing close-hauled with a swell at three-quarters ahead, never dropping below 8 knots.
The boat responds instantly to the helmsman’s actions as he steers to steady the boat over the wave, sporting an ecstatic smile as he guides this stunningly powerful plaything.

We arrive before the clock strikes 5 pm, with happy, salted faces and our sails lowered as we reach the fairway of Rodney Bay marina in Saint Lucia. There, we secure a place on the pontoon for large yachts before heading off for a pint of beer on shore! We’ve covered the 71 miles in under 8 hours in supreme comfort despite the day’s strenuous conditions. We even managed to enjoy a hot – sit-down! – lunch on the way! 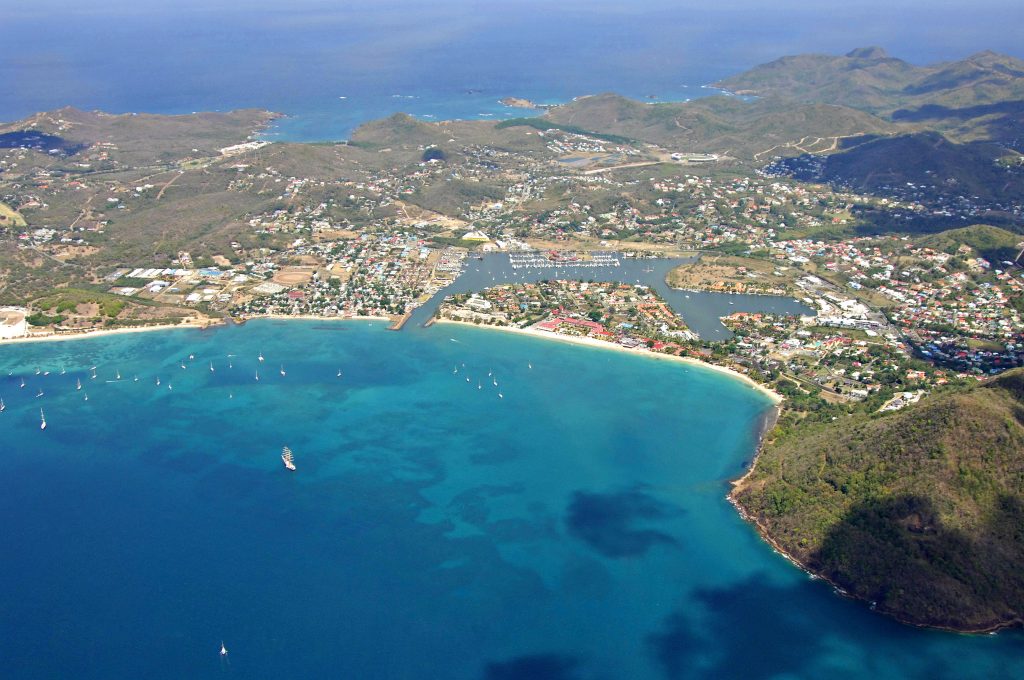 The Sun Odyssey 54 DS is a very accomplished boat with an unmistakable look, unfailing robustness, well thought-out luxurious fittings and first-class handling at sea. When it comes to this size of sailing boat, she tops my list. What more can I say… I LOVE HER! 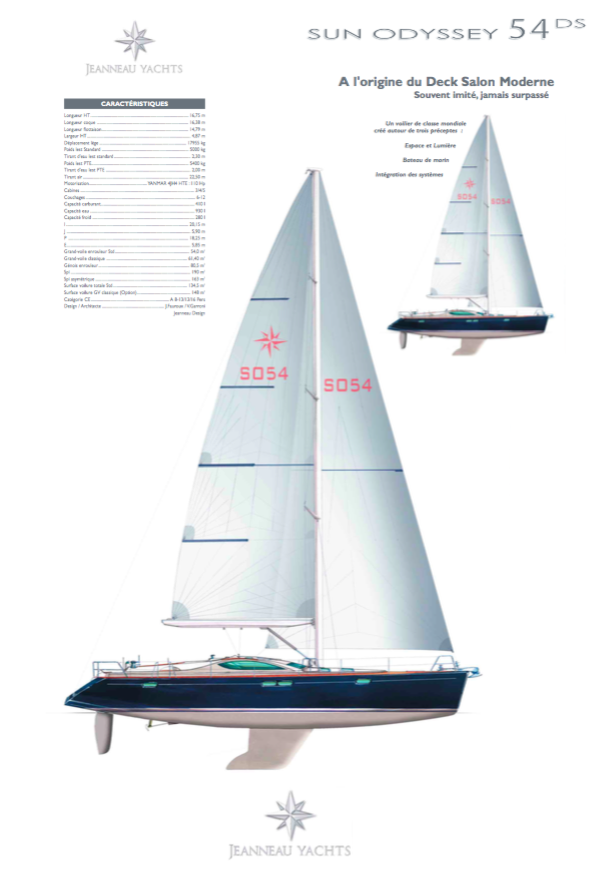 See all the Sun Odyssey 54 DS models listed in our previously owned boat ads, and own your own version of this Jeanneau yacht.

This test report was written by François Meyer.

How to choose a boat? Follow our tips on buying your ideal boat!