First launched in 2007, the Oceanis 31 has just been replaced by the 30.1 after a long period in production. Belonging to the fifth generation of Océanis and designed by the twin partnership of Finot and Conq, it’s fair to describe it as a strong commercial success.
Spirited at the helm, habitable, well finished and cleverly thought out, this elegant and spacious sailing boat is the perfect choice for couples or young families.

Standing on the quay at the back of this 2008 Oceanis 31, I note to myself that this sailing boat gives the impression of being longer than its official 9.3 metres (around 30 feet). Is this due to its 3.36 metre (11 foot) width perhaps, or the wide transom skirt of a kind we’re normally used to seeing on larger boats?
Whatever the case may be, the Oceanis 31 is certainly not lacking in looks, with its all-teak cockpit equipped with three portholes and its slimline coachroof portholes following the structure’s curved form. 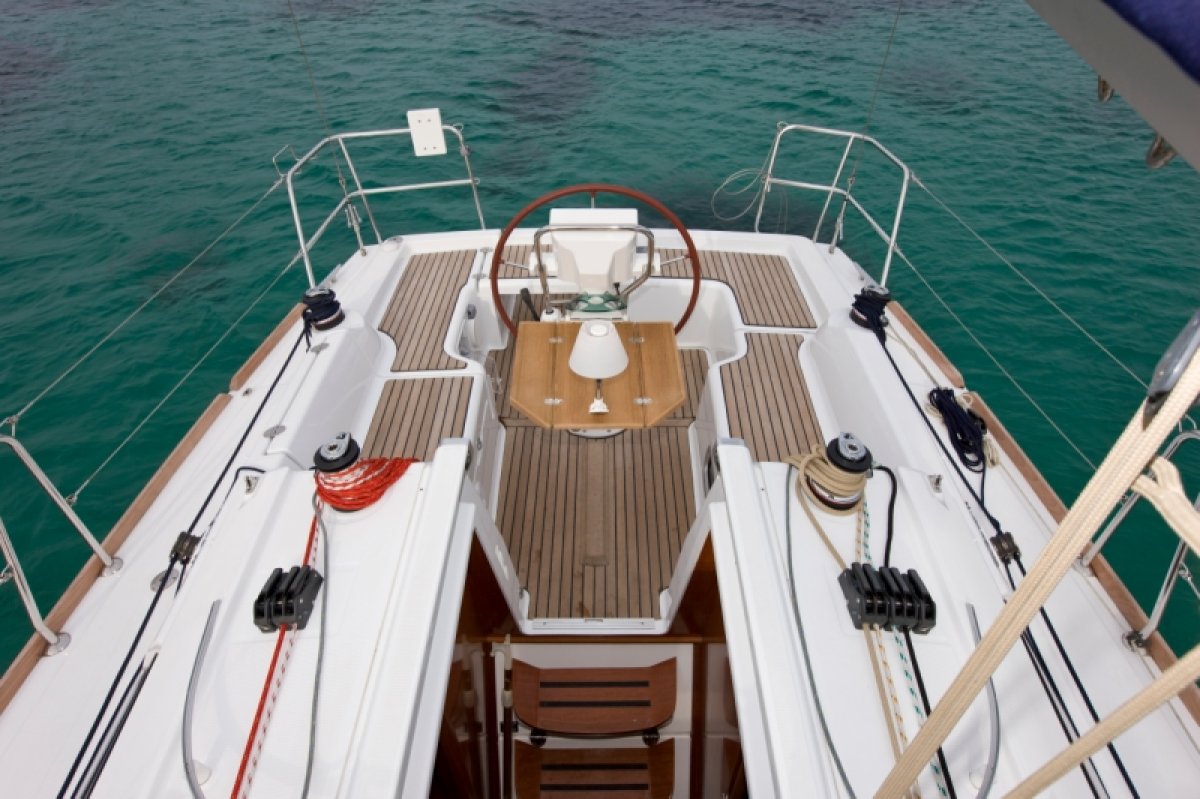 The wheel takes up quite a bit of space in the cockpit, but because you feel like you’re on a larger boat, its presence is a feature to take pride in, even if a simple tiller would actually make more space available. The instrumentation is provided entirely by B&G, which is a definite plus point and the result of partnerships forged during the process of considering various different models with the suppliers. All the fittings are supplied by Harken and the sails by Elvstrom.
Our boat has the “Comfort” and “Offshore” packs as well as the B&G pilot option. 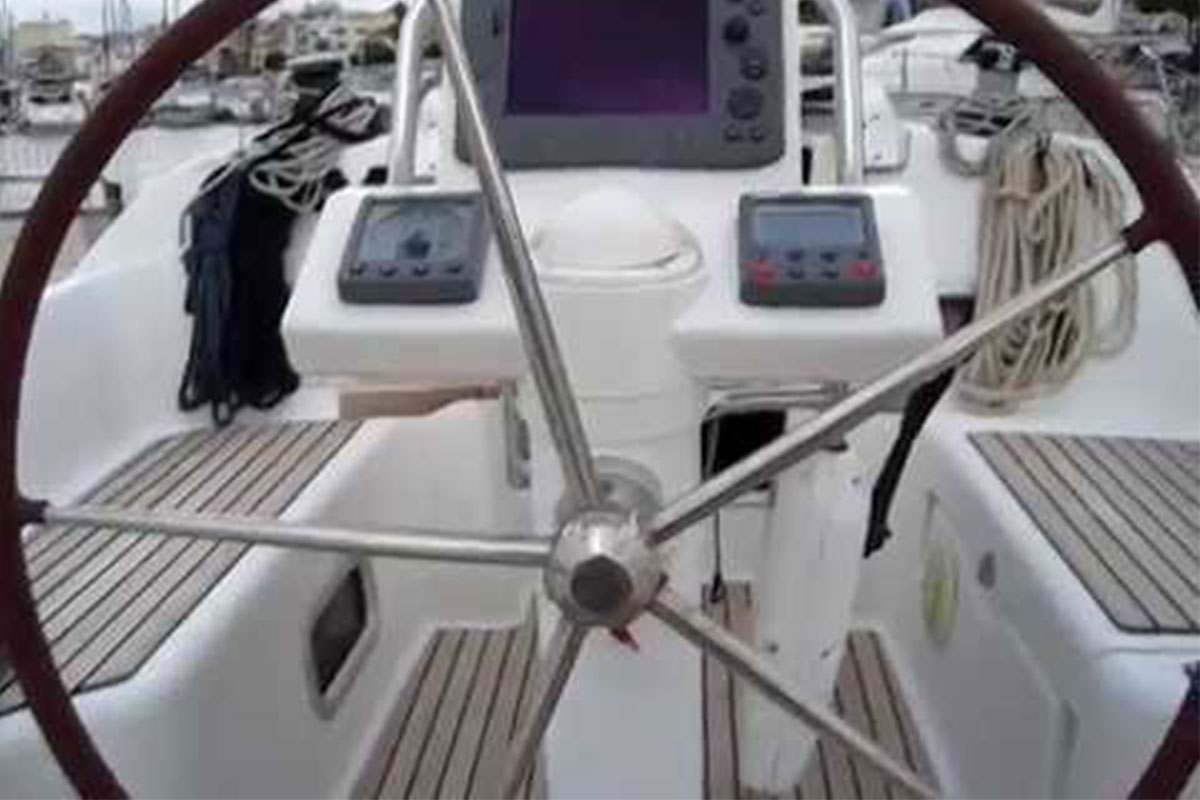 A serious rig, especially in the performance version

Speaking of fittings, there are two genoa winches aft, near the helm station, and two others on the coachroof. With the distance involved not huge, manoeuvring the boat alone shouldn’t be too difficult.
Harken also provides a rigid downhaul, which is a plus. The mainsail is semi-battened (two automatic reefs) and uses the German mainsheet system. The boat also has a 104% roller-furling genoa.

The performance version features a more powerful sail set-up from higher up in the Elvstrom product range as well as three automatic reefs.
As I make my way towards the front, I have to contort myself to pass under the shrouds and get to the windlass and the anchor locker, which will hold as much chain as we’d ever want to take! On the way, I notice an attractive solid wood strake running from fore to aft. 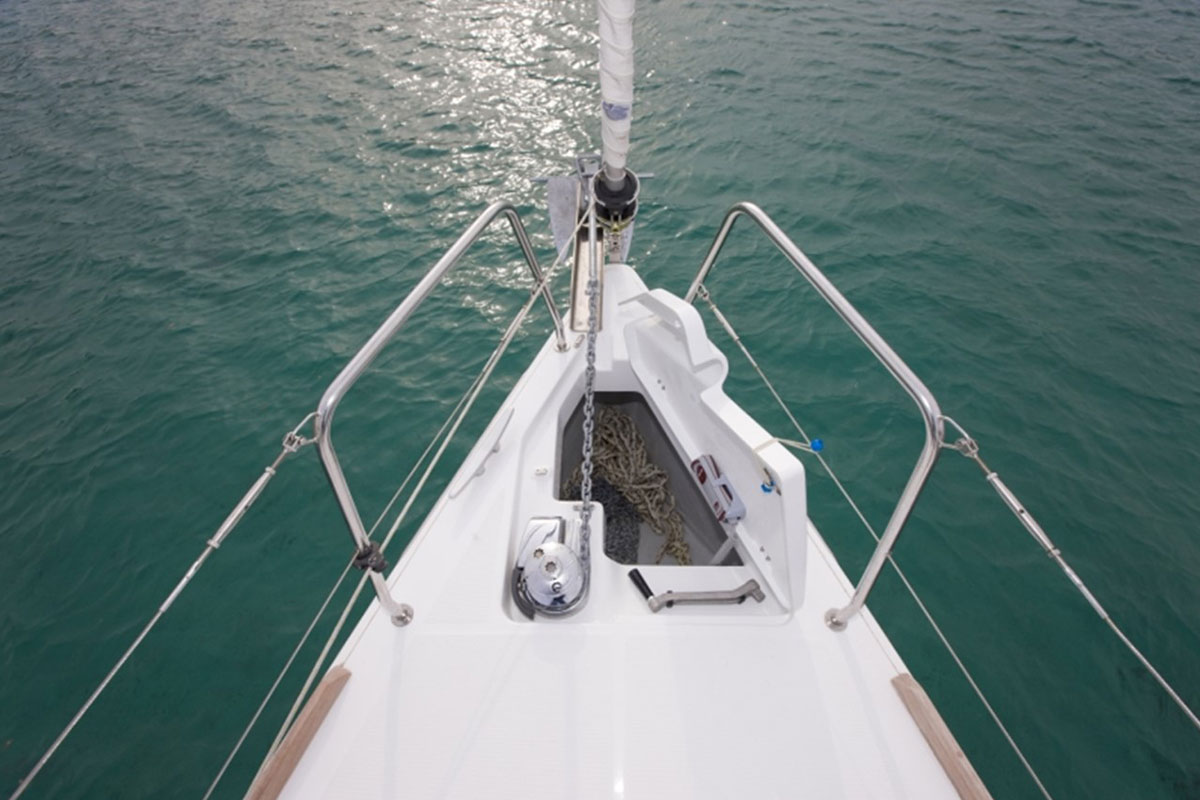 A spacious and geometrically varied interior

I head down below and arrive in the saloon, which features a small galley on the port side and a compact chart table on the starboard side.
The sideways configured aft cabin can accommodate a person of large stature, whereas the one at the front has a little less length to offer. However, the person furthest back will find themselves obliged to climb over the other to get out!
The bathroom is that of a 37 footer! This is definitely a point in the boat’s favour. Height under beam: 1.82 m (5 ft 11½ in).

Note that from 2014, the boat could be ordered in either a “Loft” version, with an enclosed bed at the front, or in a compartmentalised cabin version. The woodwork was available in several different colours of synthetic veneer ranging from lighter to darker shades, all with the same finish… artificial. Are solid woods and wood veneers really that expensive? 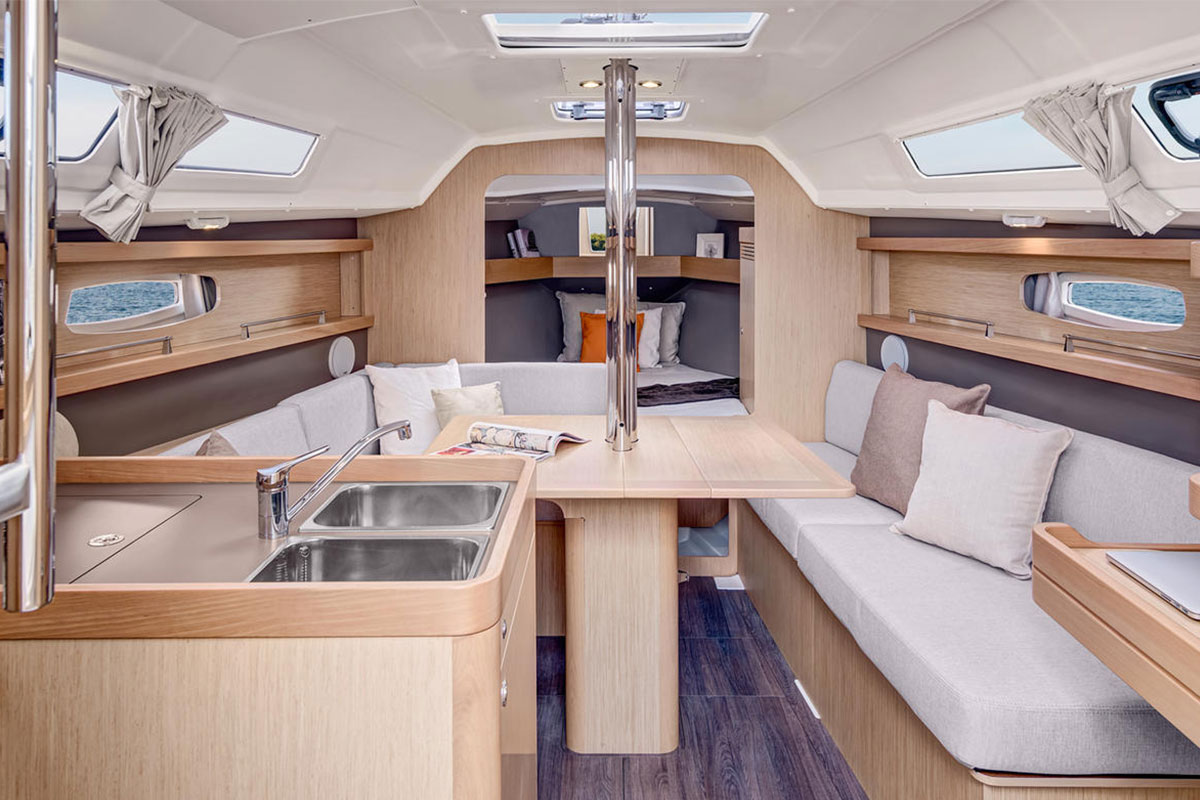 How things work below the boards on an Oceanis 31

The Oceanis 31 is sold with a single service battery as standard, but the one I’m testing has a second one installed, making it 2 x 70 Ah, which I’d say is the minimum you need. The shore charger is a 40 A model, which is a good feature, and the engine battery is separated from the service batteries by an electronic separator.

The engine itself is a 21 hp shaft-drive Yanmar with a large 125 A alternator, which is a very big alternator for small batteries! These are AGM batteries, they shouldn’t boil so easily, and 130 litres of diesel is enough to last around 40 hours at average speed.

Sea test: sailing on an Oceanis 31 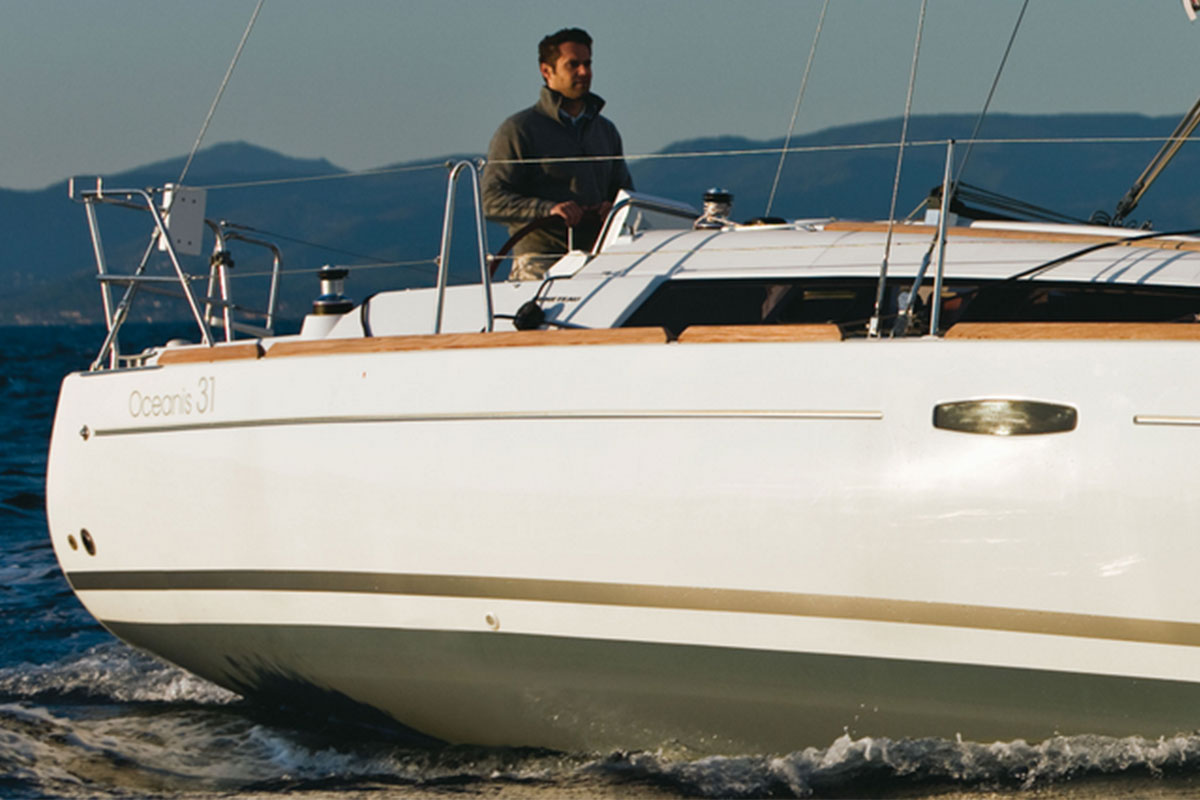 It’s quite a rare thing to be able enjoy an aperitif in the living room of a house looking out over your sailing boat and then simply set your glass down, step outside through French windows and climb straight onboard! This is a typical everyday experience at the charming marina/residential development of Port Grimaud in France’s Var region!

There is not much wind today, barely five to six knots, but it’s bright and sunny, and we’re determined to find out how this Oceanis 31 performs.
We don’t have a bow thruster, but the weight of this little gem of a boat (4,900 kg unballasted) allows room for improvisation and imagination. We begin by pivoting the front around on our deliberately doubled mooring line at the stern, quickly slipping a fender between the quay and the boat by hand from onboard as we do so, and we engage forward gear to move off from the quay. “Who says you need a propeller anyway?” we muse to ourselves as we sail past the Hotel Giraglia.

We head out towards Saint-Tropez for the day, where we plan to have lunch at Pampelonne. The wind is blowing from the west, as it often does in this area, and we make our first tack, to starboard, and with everything up, and head in the direction of Sainte-Maxime. We are comfortably in place and well positioned standing at the helm of this boat. The helm responds instantly, and the two rudders feedback enough in the way of sensations to make things immediately enjoyable. 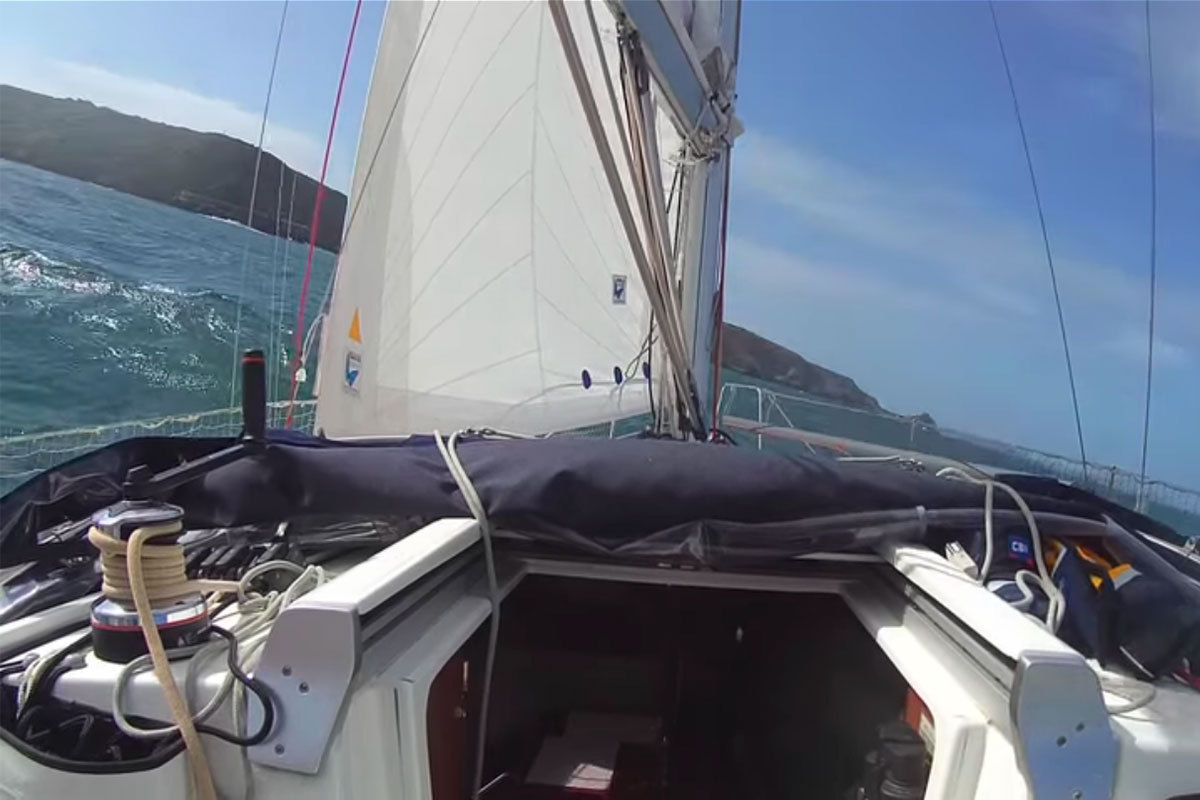 I feel much better standing than sitting, as the backstay gets in my way in the latter position.
Sailing downwind, with everything up and a wind of five knots, we make forward progress, accelerating up to two or three knots in bursts; it’s not hugely fast, but we’re making progress. I turn one way then the other, taking advantage of the “German” mainsheet, a set up that enables you to use it from the helm.
We then turn to tack with the wind on the beam, heading in the direction of the port of Saint-Tropez, which is very close by. We make our way into the outer harbour using the engine but quickly find ourselves ejected: hanging around in this port in summer on a sailing boat the size of the dinghies of its resident boats is out of the question!

No problem. It gives us the opportunity to appreciate the remarkable manoeuvrability provided by the boat’s engine, enabling it to thread its way through the port with great precision. Altering course back towards the east, the moment comes to see how she performs out on the waves, though this is not because the weather has changed: a Mangusta 165 comes storming past us at perhaps 15 to 18 knots, and at very close quarters, causing a fast, deep backwash.

The galley lockers stay shut, but our eggs fall off the sink, creating a modern-art inspired decoration on the floor. So to that charming crew from Georgetown: thanks for that. How difficult it is to coexist with these unbearable vessels loaded up with jet skis and fitted with horrible underwater lights and high-powered sound systems!
When we get to the beaches of Pampelonne, we find the same lovely boat again, along with another forty or so similar craft.
Suddenly feeling in a misanthropic mood, we continue on and end up sheltering at the foot of a hotel in a charming little cove, where we take the opportunity to enjoy a spot of swimming and fishing. Though the swimming was enjoyable and easy to do from the wide transom skirt, the fishing proved fruitless, with not a bite produced. No matter, there was no shortage of provisions onboard…

Stylish, spacious, seaworthy and inexpensive: it’s no wonder the Oceanis 31 had such a long run in production. It fully deserved its longevity. Its successor, the 30.1, has a lot to live up to!

Discover the complete range of Oceanis 31 we have available among our used boat ads and become an owner of one of these boats from French manufacturer Beneteau yourself. 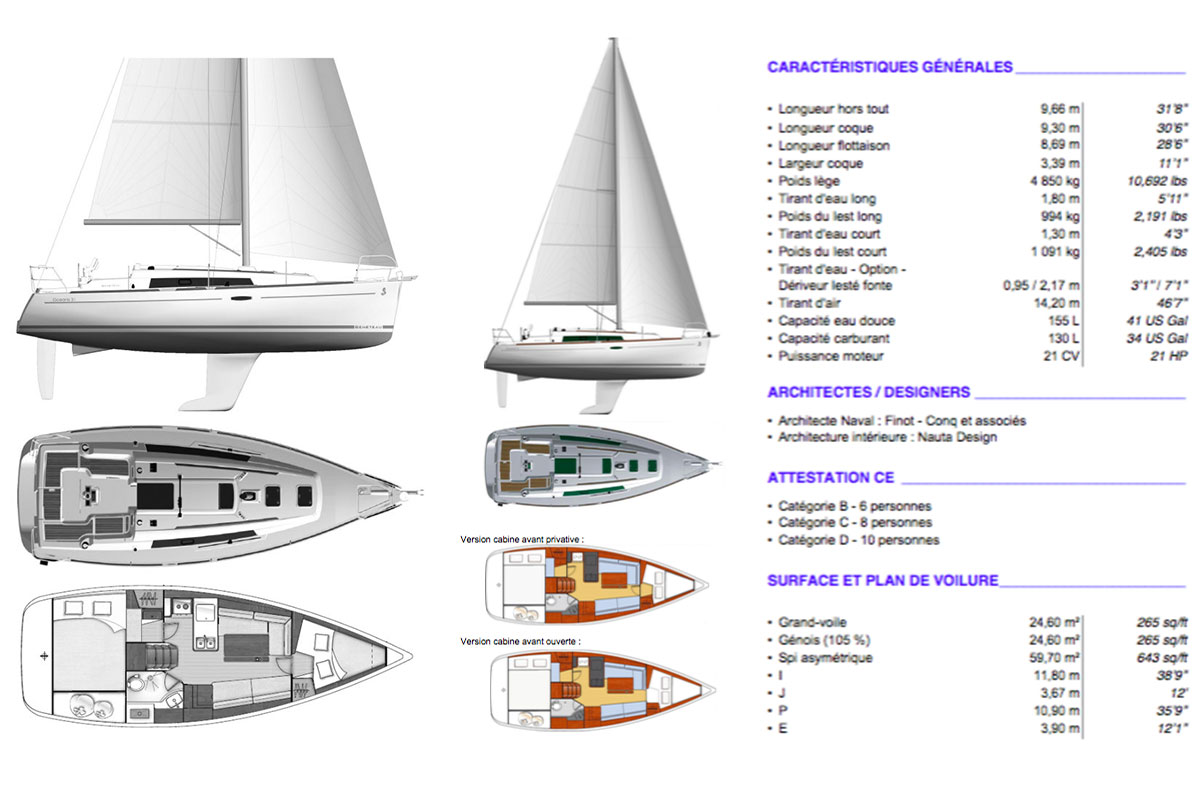