Boat test of the Lagoon 42, a superstar among catamarans

Released in 2016 and awarded Yacht of the Year 2017, the launch of the Lagoon 42 was of crucial importance to CNB, because it had to replace a bestseller, the 420/421 of which 270 units were produced.

The Lagoon 42’s design and construction

With its VPLP hull, and an exterior design by Patrick Le Quément and the Italian interior furnishings of Nauta Design, it feels like some real magic went into the creation of this catamaran.
The Lagoon 42 is deliberately “curvier” than its predecessors. The swoopy gullwing bridgedeck was designed to minimise pounding from the sea in rough weather.
The high glazed vertical windows, that bend around the cabin corners, reduce the greenhouse effect in tropical climates.
The composite bimini is also curvy and angles up until it almost looks suspended.

The injection moulded construction gives it a slightly lighter weight of 13 tonnes, which, far from making it a lightweight (a Marsaudon TS 42 of the same dimensions weighs exactly half as much) at least enables it to avoid getting bulkier from one generation to the next.
A solid, structural centre beam adds strength and rigidity while reinforcing the forestay fitting as well as the anchor roller with an anchor chain well that runs along the top of the beam rather than below it.

Like other contemporary Lagoons, the mast (VMG Soromap) has been moved aft for a wider choice of downwind sails.
The mast’s position also helps keep the weight centred to reduce pitching. The boom is also shorter and the mast higher.
The square-top mainsail (by Incidence) has a larger sail area of close to 40ft² over standard mainsails.
A forward positioned self-tacking jib makes sailing easier with small crews.

The super wide transoms enable almost two of you to move around the front of the catamaran and are only two steps away from the cockpit level. However, the “flush” effect that the designers have gone for almost removes any means of holding onto the extremely slippery coachroof… What happens when there’s rough weather?

In the cockpit, the starboard table accommodates 8 people, facing a couch that seats another two.
The raised helm to port is just three steps from the cockpit. Visibility is good when you’re tall (but almost non-existent when you’re sitting down and you’re short!) and there’s enough room for two crew members to work together with all the winches and instruments to hand. Lines lead to the cockpit, right into the hand of the helmsperson who can manoeuvre their boat on their own, thanks to the self-tacking jib.
The ergonomics are very good, you can stand up everywhere and visibility to the sails through the raising hard-top bimini is excellent.

On the other hand, there aren’t any handholds on the opening roof and I dread to think of getting around in bad weather, on the rear hard-top bimini (where the mainsail track is mounted) which is slick as anything…
A special mention goes to the folding davits, which don’t encumber the swim zone. 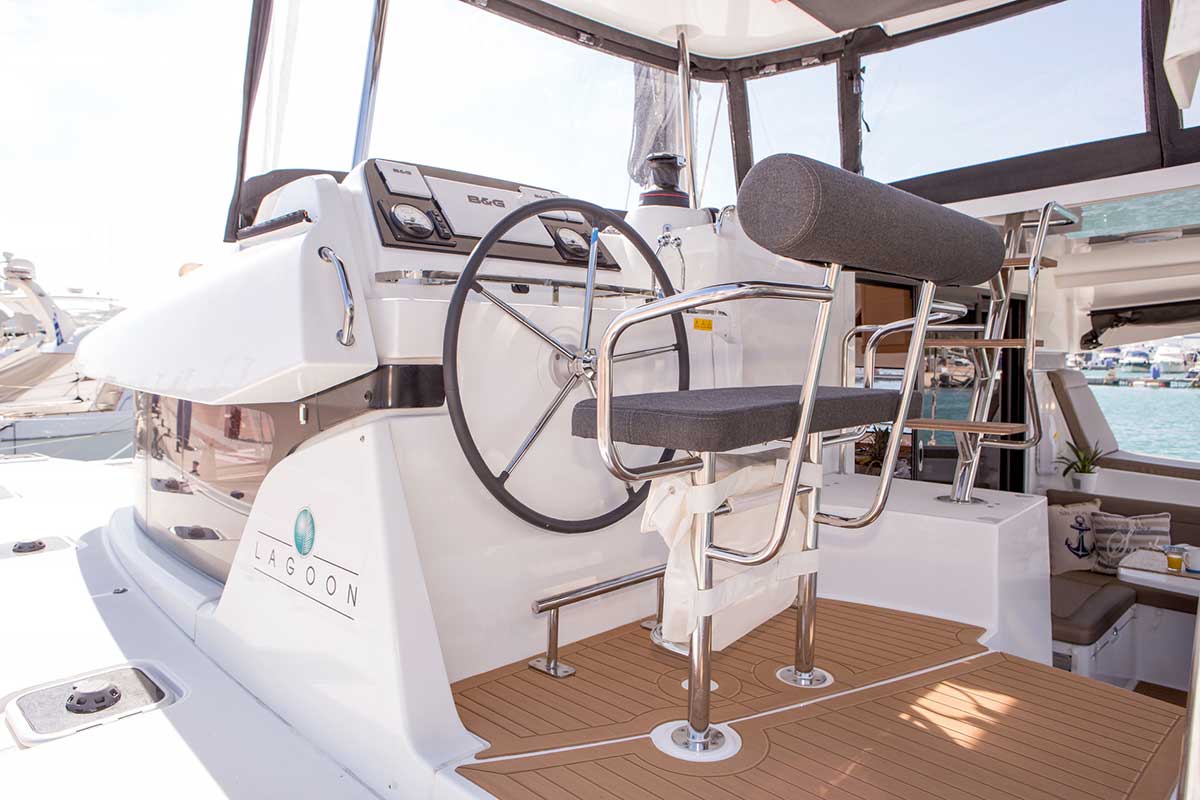 An interior full of space and comfort

A genuine three-panel glass door leads from the cockpit to the saloon and the U-shaped galley. The latter includes a cooker/Eno stove with three hobs and a single sink to starboard as well as refrigeration to port. The top-loading fridge is just at the edge of the stairs to the port hull and is so deep that you have to be careful not to fall into it when you’re trying to reach to the bottom !

There is a large L-shaped settee inside that also serves as a seat for the chart table/nav station. This is a plus point because here there’s a set of B&G sailing instruments for a position check and where you can operate the helm using remote controls from inside.
The quality of the woodwork is satisfactory with cubby holes where the bottom part of the opening hatches is often made of solid wood, which adds some real durability to areas that are often weaker. There are no sharp angles to hinder movement. 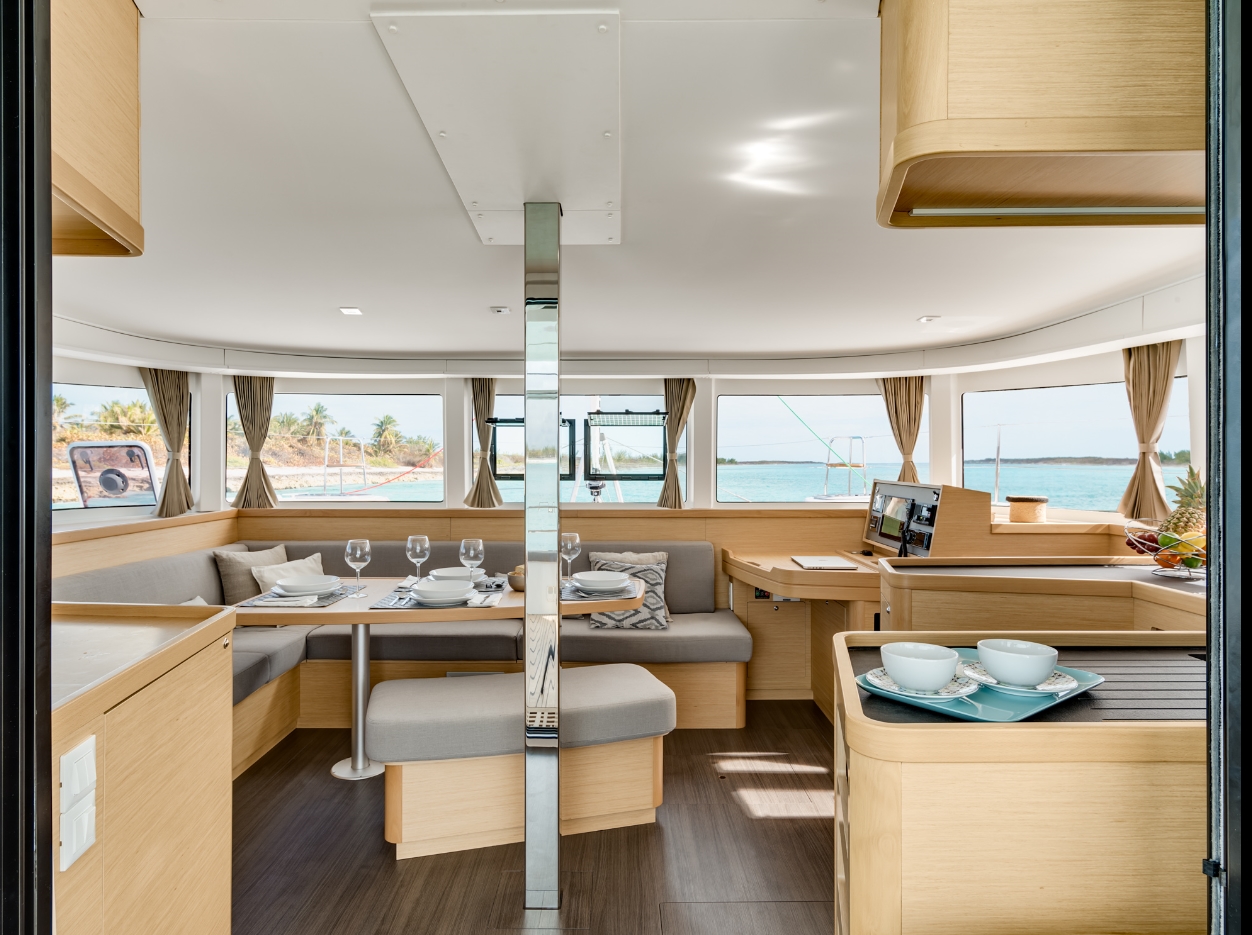 Our trial boat had a proprietary starboard hull. From the island bed in the rear with a real slatted bed base, there’s a view over the surrounding area. A lovely office and a WC occupying the entire front end complete the picture. The massive shower also gets a special mention !

On the port side there are two cabins and two smaller shower rooms as well as an additional sleeping area (crew) at the end of the hull. 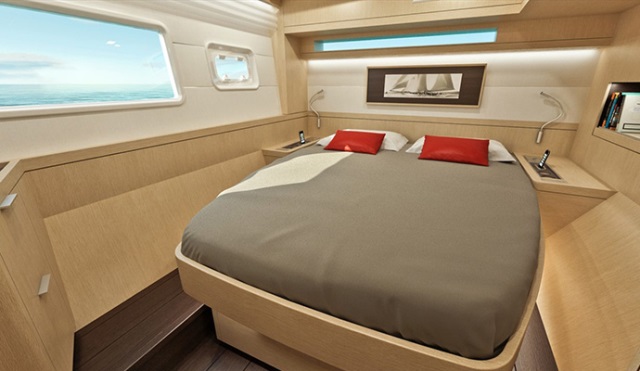 Trial at sea: sailing on a Lagoon 42

Four of us set out to try this new future superstar from the Lagoon shipyard. This boat is specifically designed for four. A couple with two children.

While the crew we had was ideal for a test under real conditions of use, the wind was having none of it…
With just 10 knots of wind, we weren’t likely to capsize this lovely catamaran on this occasion…
With the mainsail and self-tacking jib fully deployed, we managed 6 knots with 11 knots of wind. Not bad for a motorhome!

As soon as there were regular gusts, the boat took off and we didn’t need any further excuses to rig the Code Zero (732ft²). Mounted on a furler, it deploys in seconds to radically transform the behaviour of this Lagoon 42 cruiser.
Still under a light breeze despite being out to sea, as soon as we picked up a gust of 10/12 knots, the boat accelerated to 8! This way, we blew everything that came near us out of the water in the Baie de Saint Raphaël, 45-50’ monohulls included ! 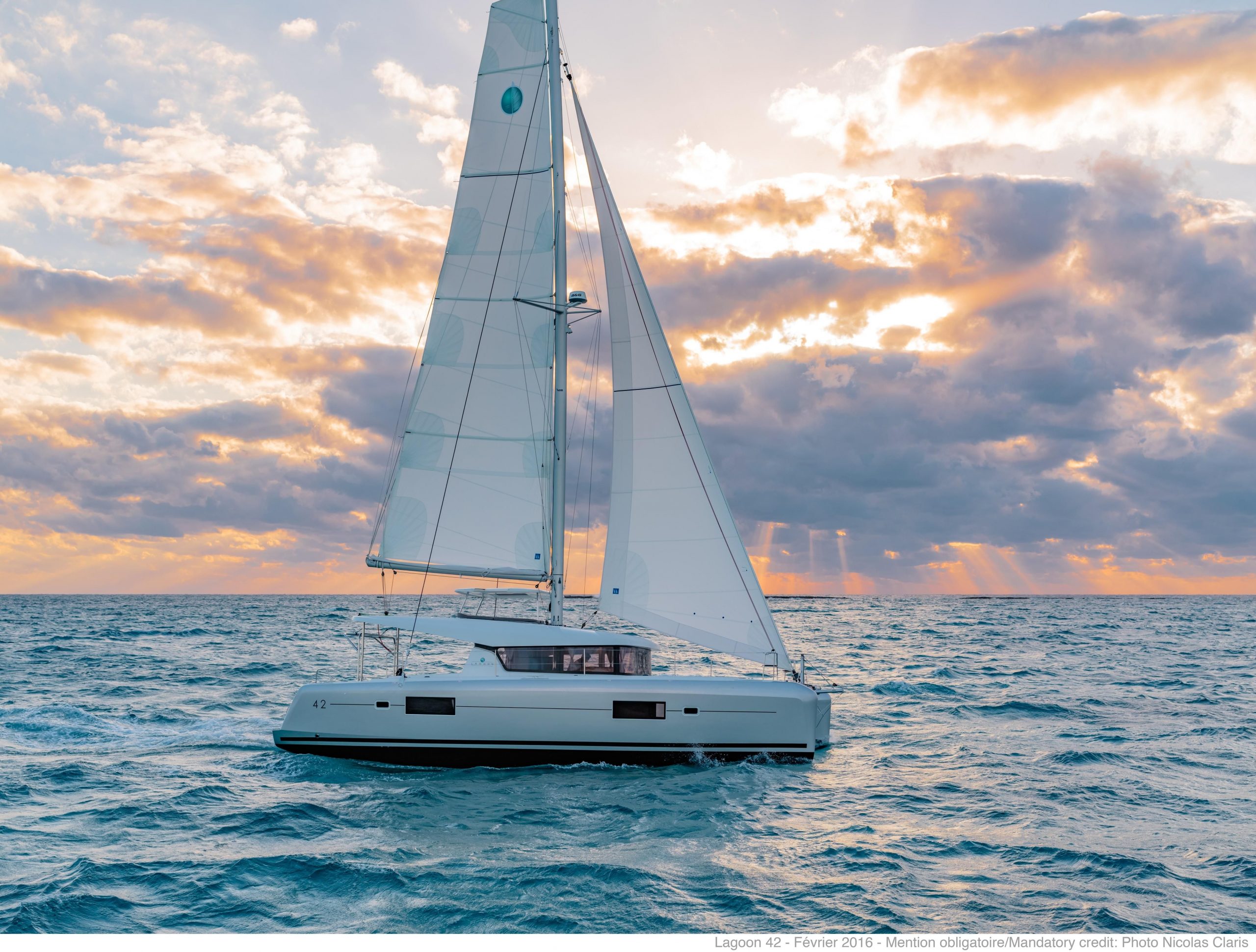 Returning to port using the engine, our twin 57hp Yanmars with saildrives mounted with the Rolls Royce of propellers (Flexofold) delivered a speed of almost 9 knots at 3,200 RPM. At cruise speed, we got 7.7 knots at 2,000 rpm.
With 2 engines and only 300L of fuel, the tankage seemed a bit light, but there’s so much space on board that it would be easy to bring a second tank with you.
One last word on the engines, they each have a massive locker where the easily accessible helm jack is routed. 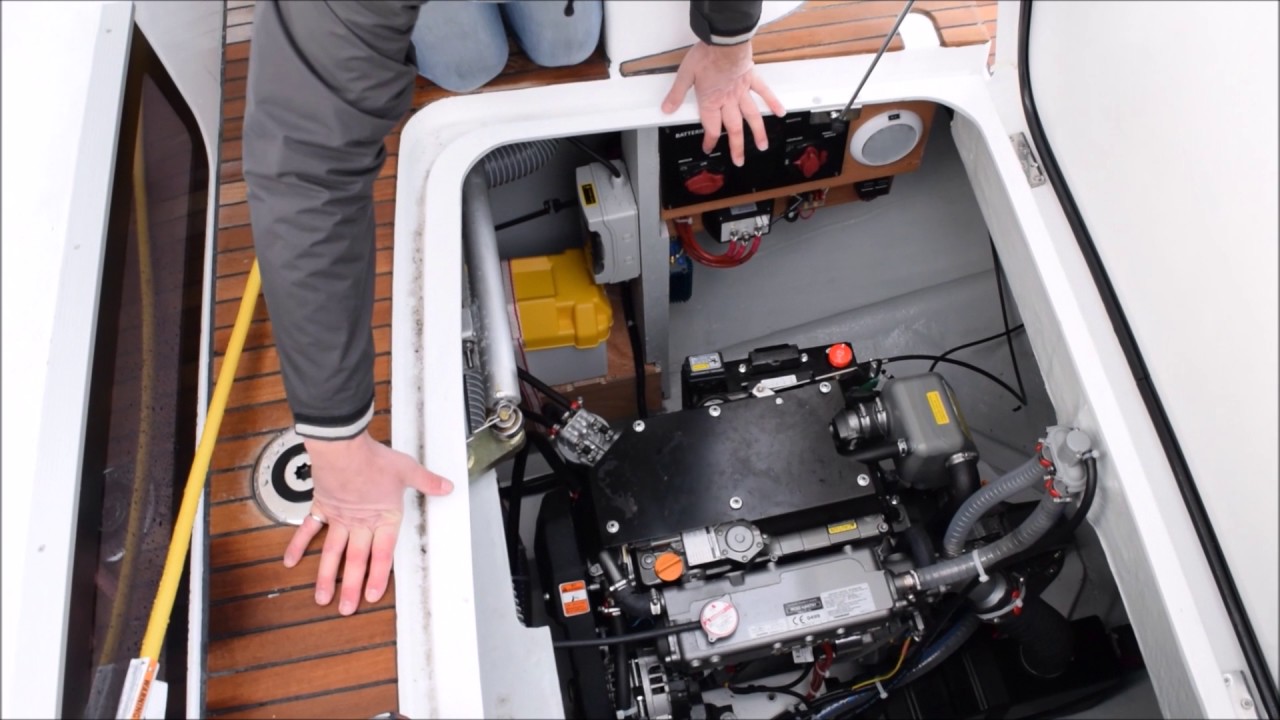 The spacious, extremely comfortable, well-designed, elegant and solidly constructed Lagoon 42 catamaran has got everything it takes to be a hit and the sales figures back this up!

Discover our latest ads of used and new boats on Band of Boats !
This trial was written by François Meyer. 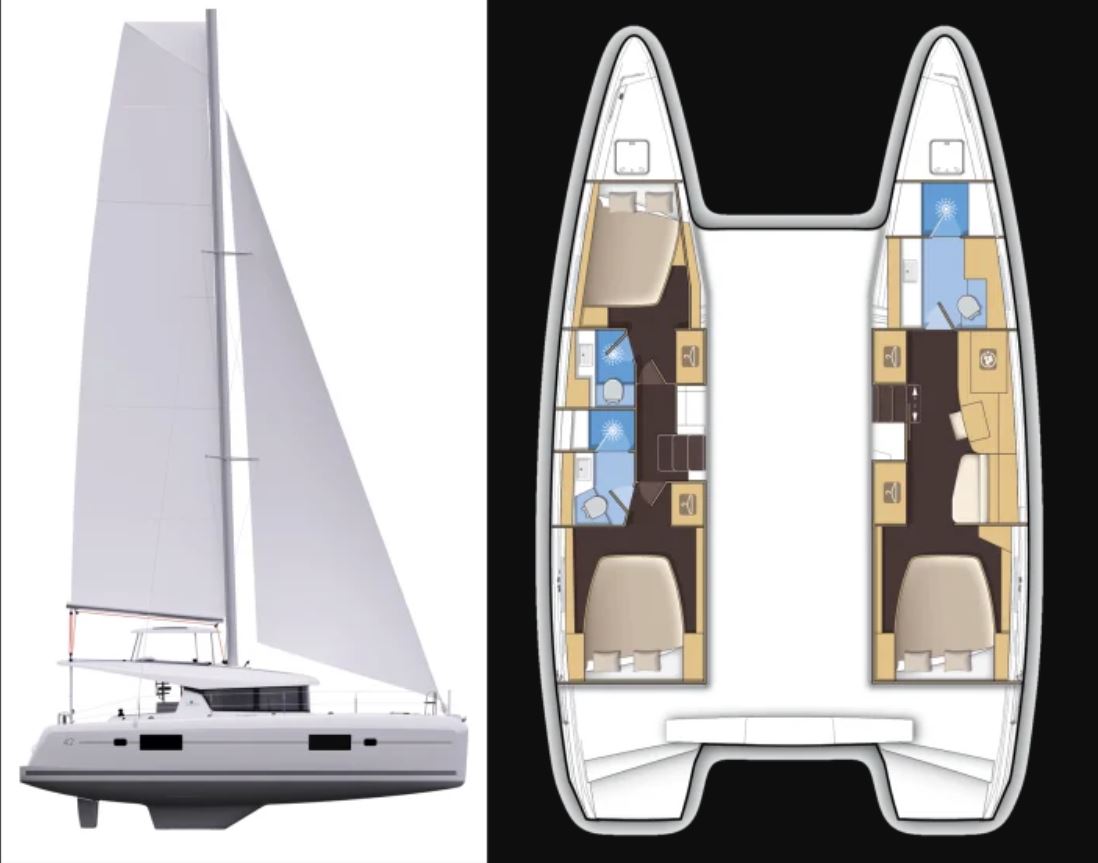