As the European Yacht of the Year 2015, the new version of the Bavaria 46 cruiser, launched at the end of 2014, breaks very strongly with the first generation, dating back to the early 2000s. The parentage of this 2014 version descends from the 45 cruiser from 2010 (Farr + BMW Design layouts). So here’s our sea trial of the Bavaria 46 Cruiser !

The key concept for this sailboat’s brief was to give the Bavaria 46 Cruiser plenty of space.
When you’re pretty tall, how can you not be excited at the prospect of trying out a big cruiser whose main characteristic happens to be space! In the three-cabin version, which can accommodate a crew of three people, we’re not likely to be stepping on each other’s toes…

The Bavaria 46 Cruiser: an elegant design

Certainly, some may think I am easily impressed with sailboats, but my accolade is based on my careful observations of this 46 Cruiser from 2010 (Farr + BMW Design layouts).
First of all the wide swim platform, the widest in the segment according to the manufacturer, occupies close to 80% of the width of the transom.

The very large cockpit, with the slanting roof and the almost straight bow with no chine gives the boat a very distinguished and elegant look, a far cry from the ultra sporty look which certain shipyards tend to favour.

From the dock, and a three-quarter rear view, the Bavaria 46 Cruiser is certainly impressive

The Bavaria 46 Cruiser and its ergonomics

The cockpit is certainly wide, accommodating two steering wheels and a central cockpit table for the navigation station. Just one small note on the cockpit access, which is only one step down from the platform level. Once on board, you can easily walk past the table on either side to walk down. You can definitely feel that this boat is wider than the previous generation with a midship beam that is further forward.

You also feel this sense of width when you walk to the front. At the front there is a 1,200 W Quick windlass, and just behind, there is a sail locker. 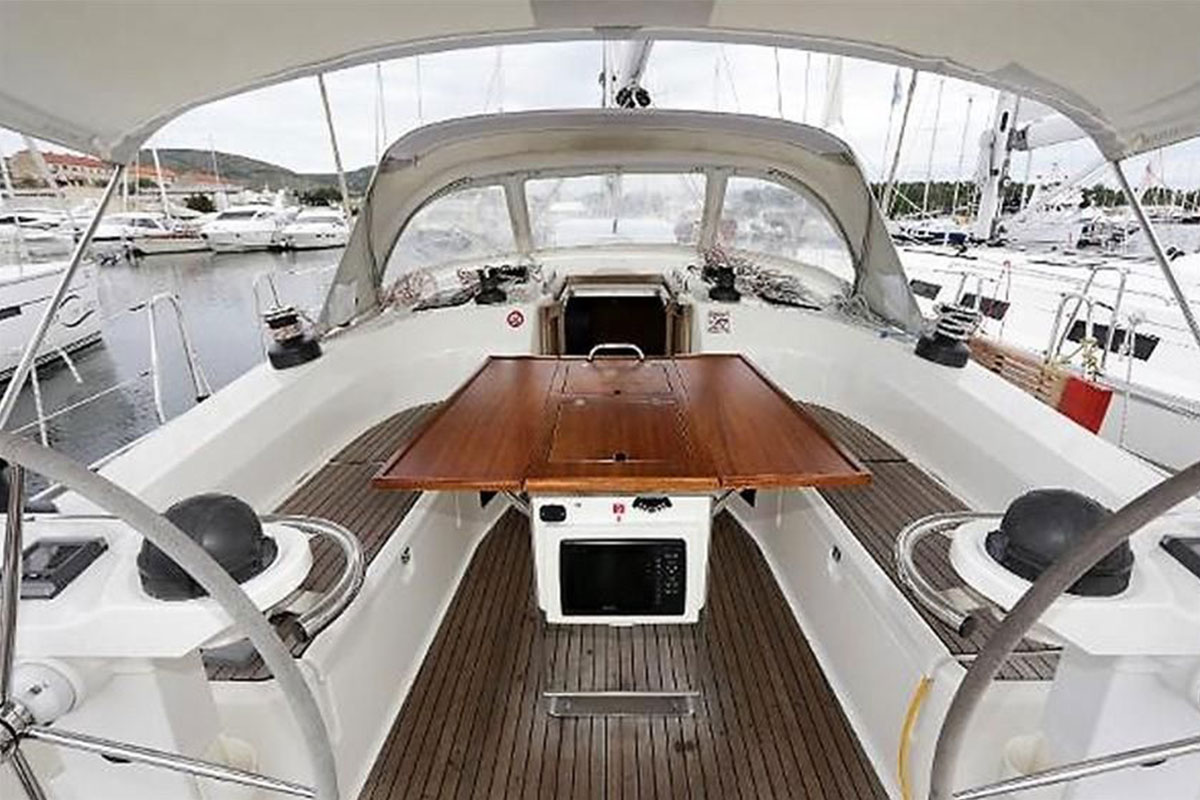 A sailboat with quality rigging and fittings

In the cockpit, you’ll find Lewmar winches and Spinlock jammers on the roof.
The layout means two people can easily manoeuvre this boat.
The (Elvstrom) mainsail on a (Selden) furler is rigged, as you might expect on a Bavaria, the German way, one of the shipyard’s historic standards, and while it might not give you the same performance as a battened sail, it affords a variety of settings in a stiff breeze. The same ethos is evident in the self-tacking jib. Our boat has a 5th winch, near the starboard helm for lowering the mainsail.


All the equipment used is generously sized and perfectly fitted.

The deck and deck plates above the waterline are constructed from sandwiched polyester and Airex foam (foam with rigid, hermetic cells that hardly absorb any water over time).
For extra rigidity under the waterline, the hull is built from a stitched and chopped mat fibreglass laminate, sandwiched between two layers of Coremat “felt”, all of which is injected with isophthalic polyester resin. This non-woven polyester cuts down the resin’s absorption to a minimum while providing increased stiffness.

The cast iron keel is bolted and glued to the hull with a special reinforced design. The deck is bedded to the hull in a polyurethane sealant and screwed down at regular intervals. The hull, keel and rudders are identical to those used for the previous version.

Under the yacht’s deck

Equipped with a generator, a 3,000 W 12/220 converter, a bow thruster and all the usual conveniences, the Bavaria 46 Cruiser has a triple battery pack, an engine, a propeller and house assistance. The house pack itself includes no less than 3 x 140 Ah batteries, a total of 420h, not bad!

A very good point that is often neglected on French models, is the inclusion of a solenoid battery at the head of the gas circuit, so you can shut off the gas circuit after each use from the control panel.

Although the chart table has disappeared and has been replaced by an “adjustable navigation space” for which you use the cockpit table, raising the top like a lectern to store the charts, and though the instruments and electrics panel has been moved to starboard, this layout has certain advantages.

For example, you can seat 6 to 8 people comfortably, at least those who didn’t draw the short straw and get the “jump seats” that fold up when not in use and are located in the galley’s small central island unit.
In use, this adjustable navigation space really suits me because the chart table has enough space to fold out a chart in the morning, then, once you’ve put everything away, you can just forget about it until next morning.
While the seats on the central island aren’t that comfy, the island itself is pretty handy for helping you keep your balance while cooking in a seaway. The galley itself has plenty of storage. A three-hob stove combined with a oven completes the picture. 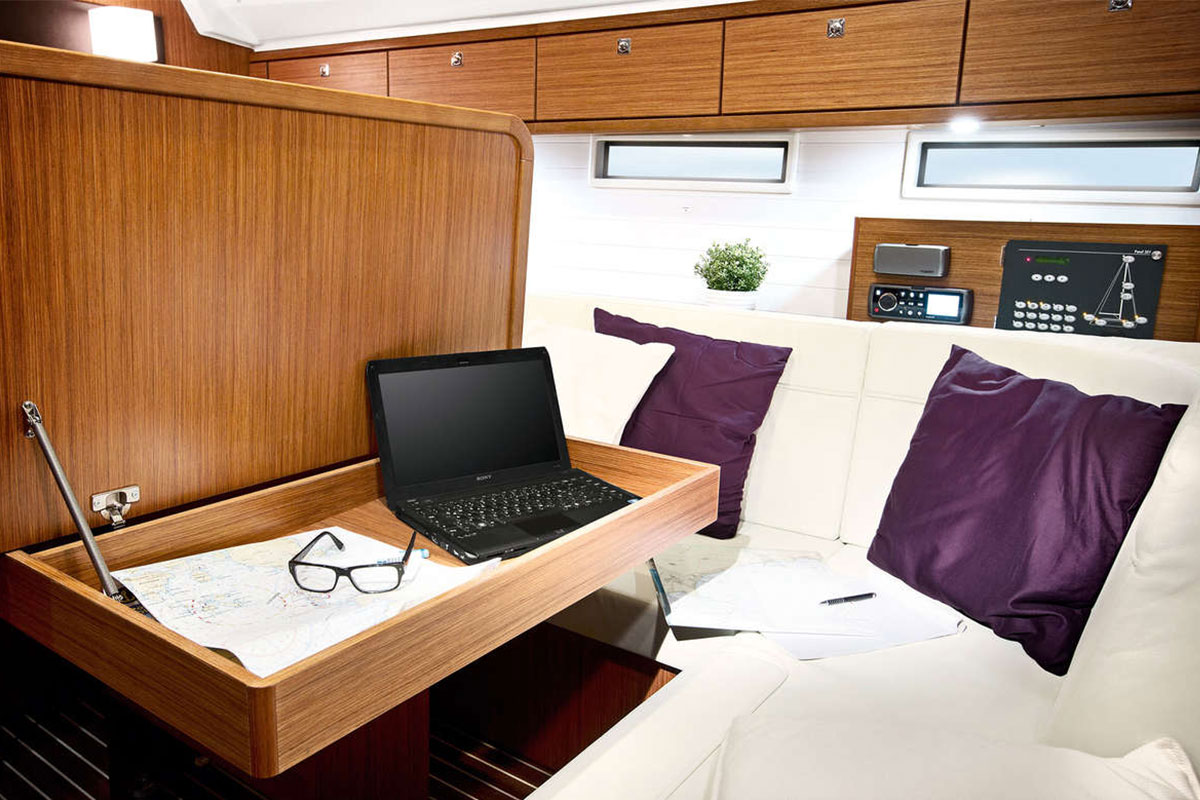 I’d been told that I was in for a surprise with this boat when it came to the cabins!
The two aft cabins, which both have a WC, are probably some of the most spacious ever featured in a boat of this size!

I was standing up straight and the housing at the bottom of the cockpit only encroaches on a very modest half of these cabins’ surface area, for a very pleasant sense of spaciousness a far cry from the coffin-style berths that are usual in these kind of cabins…
The forward cabin with its desk and WC was much more like a master suite than a traditional yacht cabin. The charter version has two double forward cabins.

Everywhere, you can see that the woodwork is high quality and, while it doesn’t quite equal the Bavarias that were made before the 2000s, a bygone era when the company only hand-built yachts, it certainly holds up to today’s French boats, if not surpassing them…

The helm is excellent in terms of the seating arrangements and is just as comfortable standing thanks to the flip-up foot cleats. The engine controls (75 HP Volvo Sail Drive) are arranged beneath the starboard helm seat. You are able to stand everywhere in the cockpit, especially at the table. We got up to 8 knots at 2,000 RPM and almost 9 on full throttle. Not bad for a sailboat!
We were easily able to get out of the port at Les Minimes with the help of the bow thruster, and reached almost 15 knots this morning off La Rochelle. The boat responds very well to the helm, the visibility is excellent and the boat is a bit hot this morning. This is thanks to the steering via lines.

At full speed, in full sail, the west wind immediately takes us up over 8 knots as we head to Fort Boyard which we’re using as a life belt before veering in the direction of Ars en Ré, close-hauled this time. Two of us were able to manoeuvre this Bavaria 46 Cruiser with no problems. The self-tacking jib really comes into its own in these sailing conditions.

The conditions stiffen when we pass the north point of the Île de Ré, heading for Les Sables. From 15 knots, we are now sailing at an established 20 knots. A small luff to de-power the boat, with the engine running just in case, but declutched, and we reef a third of the mainsail and just as much of the jib. Once we relaunched, we regretted doing that, because it wasn’t enough as the wind was rising even more. But it wasn’t a problem to repeat the manoeuvre and roll up “just enough” of the mainsail. Once we’d done this, we realised how useful it was having a sail on a furler and the infinite reefing options it gives you.

Elegant, fast, manoeuvrable, well-finished and well-equipped, this Bavaria 46 Cruiser has lots of strings to its bow. I really liked the interior furnishing (adjustable chart table), and the spacious, comfortable cockpit that was perfect for really enjoying yourself at the helm. You definitely enjoy yourself on a 46 Cruiser like this!

Discover all our Bavaria 46 Cruisers among ournew and second-hand boat listings, and become the proud owner of this Bavaria model.

This test was written by François Meyer.

Boat test of the Lagoon 42, a superstar among catamarans