With over 400 units constructed between 2004 and 2009 by CNB, a subsidiary of Beneteau, the Lagoon 440 is a spacious and well-equipped catamaran. Its characteristics have made it a regular in rental fleets where the 4-cabin version was all the rage.

One thing is obvious when we get to the piers at the Port des Palmiers, in Hyères – at a tremendous 13.70 m in length and 7.70 m in width, the Lagoon 440 requires two berths for mooring. With 4 double cabins, 4 shower rooms, 2 forward points, 2 saloons, a flybridge and a forward semi-saloon, the Lagoon 440 is among the most spacious catamarans of its time.

You access the boat from the rear with two floats which enable you to use davits to lift a tender, even one that’s pretty big (here we used one that was 3.20 m with 15 HP). A large tender for a boat that can carry between 8 and 12 people is a must. The electrical fittings are also all on the aft port side.

Once on board, you step into the aft saloon, which is to starboard, and can accommodate 12 passengers. A sink and a wet bar console on the port side are perfect for dining arrangements. The cockpit is not cluttered with any sailing accessories. The main cockpit is on the flybridge.

The walkways are extremely comfortable, and there is a lot of space outside, almost 90 m2. If you keep walking forward, you will arrive at the foot of the mast (which is mounted on the roof). If you walk further forward, you end up in front of a very pleasant lounge on the front deck, perfect for aperitifs in the sun. Large lockers accommodate the water tanks as well as the controls for the nearby windlass. The anchor locker contains 45 m of 12 mm chain, which is some serious kit.

Right at the front, the balconies feature two seats, on either side of the trampolines.

The mast has a pair of spreaders to dispense with backstays. The forestay is mounted on a fitting that is firmly secured to the transverse beam connecting the floats.

The boom, which is quite high, has a battened mainsail with 3 reef bands (that’s not a luxury, you have to be able to reef a lot on a multihull that doesn’t heel). At the front, our specimen has a genoa with a lot of overlap. All of it comes to no less than 116 m2 of upwind sail area. By comparison, a 44-foot “performance” monohull has less than 100 m2.

All rigging lines lead back over the roof to the flybridge cockpit. Once you’re at the top, you get a majestic view of the boat’s surroundings. The helm station seat is comfortable as well as spacious. There’s easily room for four of you there. Engine controls, diesel gauges, repeater – this yacht has it all. For manoeuvres, there are 4 winches, including a big size 60 winch (intended mainly for the mainsail), one for the aft port, and, at the front of the flybridge, one on the port side and two to starboard. The mainsail is managed from the aft winch, the halyards from a starboard piano and the reefs from a second piano, also to starboard. The skipper has easy access to all manoeuvres.

Descending back into the boat, I visit the large interior saloon to the left of which is a well-equipped chart table. On the model I tested, it even includes a throttle, which means you can control the boat from the inside using the nav station controls here. A big Raymarine jog lever, an ASN radio, an AIS, a dispatcher and the Hi-Fi complete the setup.

Behind this, when I turn to face backwards, I see a large kitchen with a 3-hob cooker, a huge refrigerator, a genuine freezer, and a large worktop. It is very well-designed. In each hull, there are two cabins with their own shower rooms. The aft cabins are more spacious than the front cabins. All offer abundant storage and a view of the sea via the hull portholes.

The mistral is going to be blowing over the weekend, but we decided not to go too far. So we headed towards Bormes-les-Mimosas. The two engines start up immediately and, the one time I overran, I was easily able to rotate the boat by putting the engines in reverse.

As we sailed first for a long stretch downwind in the direction of Porquerolles, it was the perfect opportunity to test helming the boat on my own. Yes, I was alone on the flybridge, because on the floor below and despite the 20 knots we were doing, everyone was talking and pouring drinks…. So I reefed once, and as I’m used to monohulls, I always have my hand not far from the mainsail traveller, and I wondered if I should double reef… I decided to go for it, so I started the motors and then took the engine into the wind, I eased off the mainsheet a bit then the halyard while hauling in the furling line then finished by tautening the halyard. Great, I was able to do everything easily, in just three minutes without leaving, or almost without leaving, my seat…

The next day, we enjoyed a frankly much more sporty return from the cove of Port-Man. We were shifting along at 25 knots, with 30 at points, and we went to a double reef with the genoa furled for a long upwind leg in the direction of Hyères.

The Lagoon 440 hit the waves, with the spray splashing right up to the flybridge and I still have this gut-wrenching fear of overturning or dismasting on these big catamarans… The gusts being frequent, we went to the third reef automatically, still via the helm station. That is reassuring because you’re not running any risks this way.

I immediately felt like the boat was less antsy even though the shrouds were whistling in the wind. I was glad I only had a short distance to travel like this… 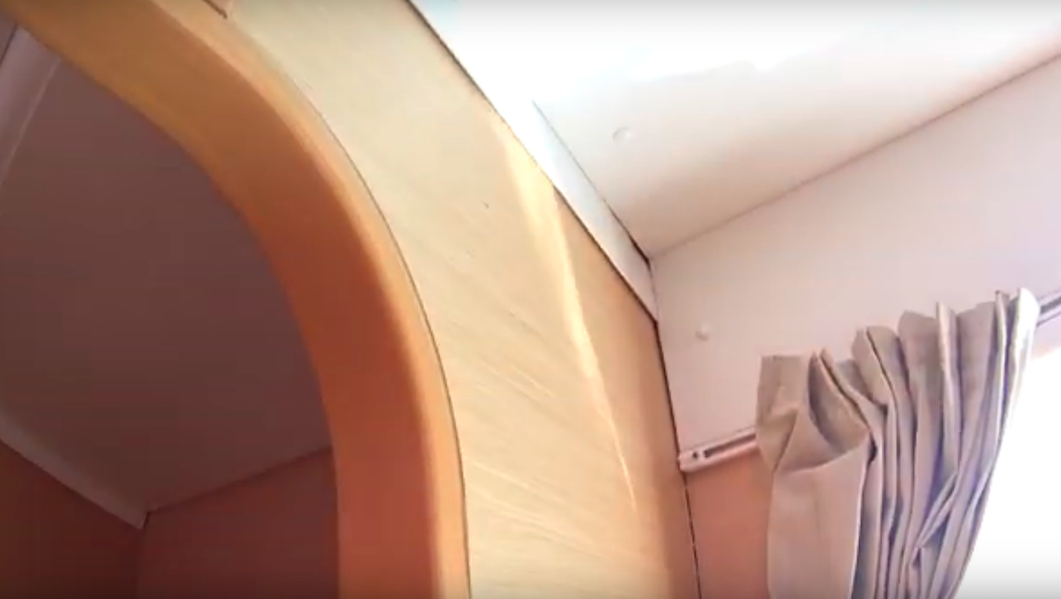 At the port, when we quickly looked round the boat to make sure we hadn’t left anything behind in the Lagoon 440 I noticed one thing that I baulked at – the bulkhead of the port forward cabin had quite a gap in it that had been hidden by the flexible seal as well as a dent in a corner near the deck and indications that it had been repaired… A defective bulkhead in this area can lead to dismasting. Clearly this boat had taken a major battering, the bulkhead broke and was given only cosmetic repairs… You can imagine the owner’s face when I showed it to him, he clearly knew nothing about it. So I left in a cold sweat in hindsight and the owner will be coming in for a hefty bill. It’s not so much because repairing it is difficult, but to access this bulkhead, you have to take off the cabin’s whole panelling, ceiling included (these panels are glued in place), replace the bulkjead in question, and then replace the panelling and decor…!

Discover the complete range of Lagoon 440s we have available among our used catamaran ads and become the proud owner of this Lagoon model yourself.